Food sovereignty and peasants’ rights in the time of pandemic | War on Want
Skip to main content
In the face of the crises of Covid-19, climate and inequality, remember that it's small farmers who feed 80% of the world, not big business. The majority of the world depends on them and their fight for food sovereignty. Our solidarity with them in their struggle is more important than ever.

In the face of the crises of Covid-19, climate and inequality, remember that it's small farmers who feed 80% of the world, not big business. The majority of the world depends on them and their fight for food sovereignty. Our solidarity with them in their struggle is more important than ever.

On 17 April, La Via Campesina celebrated the International Day of Peasants’ Struggle, under the motto #stayhomebutnosilent:

"While calling to mobilise around 17 April 2020, La Via Campesina has urged its members and allies to stay home but not silent and denounce the multiple killings, evictions and economic blockades. It has asked its communities to highlight and expose the continued criminalisation of peasant struggles and highlight the precarious conditions of rural economies. It is essential to call out the States’ negligence and its fascist, patriarchal and military practices against its people – that has worsened in times of the pandemic."

On the International Day of Peasants’ Struggle, and every day, we stand in solidarity with our partners in the Global South who are working on the frontlines with farmers’ movements and agricultural workers in this moment of crisis.

In the Global South, the most vulnerable population is suffering the worst consequences of the global health crisis as it is compounded by limited access to safe and nutritious food. While governments in the north and south are trying to fill the gaps of privatised health systems or public systems that have been ripped apart by neoliberal austerity measures, this pandemic is tightening the global food supply.

Urban centres are the focus of governments’ work, while rural areas, where the most vulnerable populations live in the Global South, are being left behind. Without swift and decisive action for justice, the threat of hunger and even worse poverty is as real as the threat of the virus.

Testimonies from our partners in the Global South

In Sri Lanka the government has imposed a curfew across the island for the last month. Our partner MONLAR is working with its People’s Planning Forums, based in eight different provinces from the north to the south of the country. The People’s Planning Forums are stepping up to provide emergency assistance to their members during this crucial time by arranging emergency funds for more than 2,500 rural households they work with, as well as finding support to buy essential materials to secure the next seasonal harvest, such as seeds. Most of their members are engaging in policy dialogues to advance policies that will help smallholder farmers, mobilising communities and demanding justice for the violation of natural resource rights.

Sri Lanka is a small island that depends heavily on imports of food from its neighbour, India. As India has closed its borders for exports due to the crisis, Sri Lanka is lacking important staple foods, such as rice and lentils. At the same time, Sri Lankan agriculture depends on imported chemical fertilisers and pesticides; with the ban of exports from its main trade partners, the country is now discussing its role in producing food for its people with an agroecological approach. This crisis is reminding the country’s authorities how unsustainable its food production model is, and MONLAR is pushing to bring forward the conversation at a national level to show how important agroecology and family farming are as alternatives to export-based agriculture, which is not taking into account the health of farmers and the food sovereignty of the country.

"In Sri Lanka, 27% of the population is directly engaged in agriculture. 90% of them are smallland holders. Military and corporations have snatched away most of the land from farmers in the name of development. (…) Coronavirus outbreak has affected the entire process of food production and distribution. Today, agriculture and seed ownership are in the hands of large agribusiness corporations. The only way to fight against these inequalities is to come together, we need to globalise our struggles."

"Our farmers are severely hit by this unprecedented situation and it has pushed them to the brink, when they were already facing many crisis situations, such as rising production costs, lack of fixed prices, loss of farmlands, lack of government subsidies and anti-farmer policies. (…) Especially at this moment, we must use the traditional and cultural knowledge of Sri Lankan agriculture. Women farmers possess knowledge of all aspects of seed production and preservation. We have to share, write and preserve this traditional knowledge, while staying at home. This is the opportunity for us to exchange these learnings amongst each other."

In Kenya, the government has closed markets and imposed strict restrictions on movement in order to prevent the spread of the virus.

"With the Kenyan social security sector already burdened by austerity measures and heavy debtrepayments, the small-scale farmers in Kenya from poor backgrounds, farming in rural areas andinformal settlements, will be heavily affected."

In addition to that, farmers markets are being penalised and shut down during a crisis where food markets should be available to all, not only corporate supermarket chains. 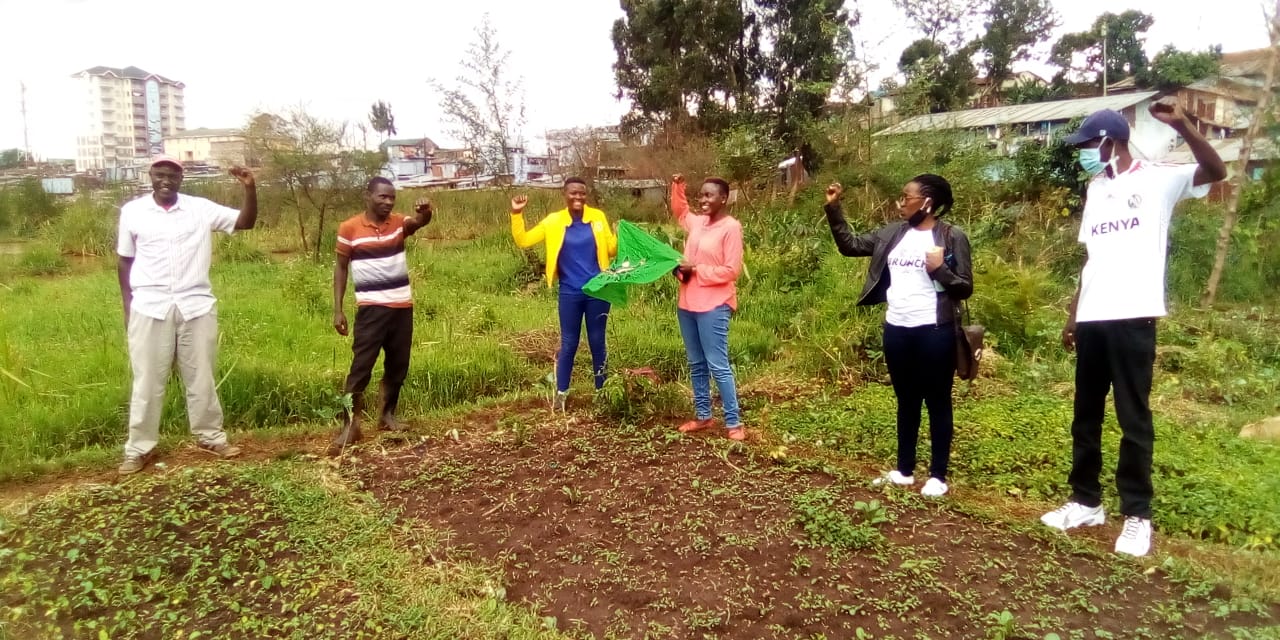 "There is increased criminalisation of the Peasants’ way of life including a case where a cattle market in Awendo was disrupted by police leading to several injuries and loss of livestock. Other cases include reduction of trading hours in local markets, destruction of farmers goods, passing of regulations without inputs of the Peasants, closure of public health facilities due to coronavirus exposing women to more burden, as they are always the care givers, and increased domestic violence. Other challenges include recent locust invasion and prolonged rains due to climate change that led to reduced harvest in the last season. We condemn the IMF and World Bank for pushing farmers to get loans to grow food for export: this will worsen the food scarcity already being experienced. We criticise the Agriculture Cabinet Secretary for refusing to buy maize from farmers, opting for importation, blaming this on IMF conditionalities.

"We advocate for the decriminalisation of Peasants’ way of life, to document cases of violations targeted at Peasants with a view of having corrective legislative and judicial actions, enhance seeds and food banking including seeds and food exchange, enhance food production by investing in Peasants, enhancing Peasants hygienic measures at farm level to prevent coronavirus, strengthen the alternative trade and economy by distributing food directly from farmers to consumers."

In Morocco – and particularly in the southern region of Souss-Massa – agricultural workers (especially women) are missing the harvesting season of Spain due to the current travel restrictions, and continue working in very precarious conditions in their country (our partners' report talks also about their situation). While agricultural workers are already suffering harassment, and exposure to harmful agrochemicals and high temperatures in the greenhouses that produce the fruits and vegetables for the EU and UK markets, the lack of protective equipment from agrochemicals is also increasing their risk of contracting Covid-19.

The economic consequences of this crisis on countries like Tunisia and Morocco (already heavily dependent on food imports) will also highlight the contradictions of food in the region commodification and food price speculation.

"Taking advantage of the health crisis, the big capitalists in the agriculture and fishery sector intensify labour exploitation, reduce the number of workers, get rid of trade unionists and senior labourers, and reduce the duration of paid work. Meanwhile, they benefit from public subsidies, tax relief, exemptions from their dues towards social protection funds, and postponement of their loans’ payments. By contrast, small farmers, fishers, wage labourers, and rural families are all suffering under the crushing weight of debts from banks and consumer credit and micro-credit institutions at high interest rates."

Farmers’ rights and right to food in times of crises

The Covid-19 pandemic throws into stark relief the inequalities of the neoliberal model of food production, based on monoculture, food commodification, heavy extraction of natural resources and the concentration of land ownership in very few hands.

It shows us how the current food systems, dominated by agroindustrial models, are environmentally devastating and unsustainable in the long term, creating the perfect conditions for the development of uncontrollable epidemics that find a perfect breeding ground in destroyed ecosystems and natural habitats. The number of zoonotic epidemics cases linked to industrial farming, deforestation, monoculture and extractivist practices (that destroy the natural habitats of animals) has increased dramatically in the last three decades.

Citizens and governments are concerned about the availability and price of food.

Now, more than ever, family farming and agroecology practices show us their strategic role in food systems: a sector that feeds the world by producing over 80% of food, with only 25% of available land.

While the UK produces and exports dangerous, banned agrotoxics to the Global South, our partners in Kenya are creating new, organic alternatives.
02 December 2021
Image

Corporate capture of our food systems: the importance of language

Corporations are co-opting the language of peasants' and environmental movements to press their agenda of profit over people and planet.
22 September 2021
Image

The Corporate Capture of Food Systems

The UN Food Systems Summit 2021 will achieve nothing meaningful while its agenda is shaped, and its language defined, by the very corporations that have engineered our current — broken — food systems.
27 July 2021
Image

The global food system is broken. Although there is enough fertile land in the world to grow food for everyone, industrial agriculture feeds corporate profits instead of people.
More about Food